Relationship between Risk and Resilience

In this action, the resilience planning team engages site leadership and mission continuity personnel to identify the site’s critical functions and establish their relative criticality, or importance. The intent of the TRN is to help organizations manage the risk to critical missions from disruptions in energy and water services. The TRN Resource: Relationship between Risk and Resilience provides more information about how risk and resilience are connected. Risk-informed resilience planning for energy and water resources must begin with an understanding of what the site’s critical missions are, and what critical functions enable those missions. Criticality weighting factors are used in the Risk Assessment module to help users identify where risk matters most in assuring continued operations. This will help focus brainstorming of resilience solutions in the Solution Development module.

It is also necessary to map critical functions to the energy and water systems that support them. In this action, users take the first step of mapping each critical function to the facilities that either house those functions or provide a critical supply of energy or water. In the Baseline Development module, this list of facilities will be used as a starting point for identifying the specific energy and water loads within them, which must be sustained.

Relationship between Risk and Resilience

This action guides the resilience planning team in identifying the site’s critical functions and establishing their relative criticality, or importance. It also begins the process of establishing linkages between critical functions and the facilities required to execute them. Facilities are identified as an interim step to focus data collection in the Baseline Development module. This list of facilities will be used later to define energy and water end uses required by critical functions, referred to as critical loads. A second output of this action is criticality weighting factors, which inform risk, solution development, and solution prioritization efforts later in the TRN. 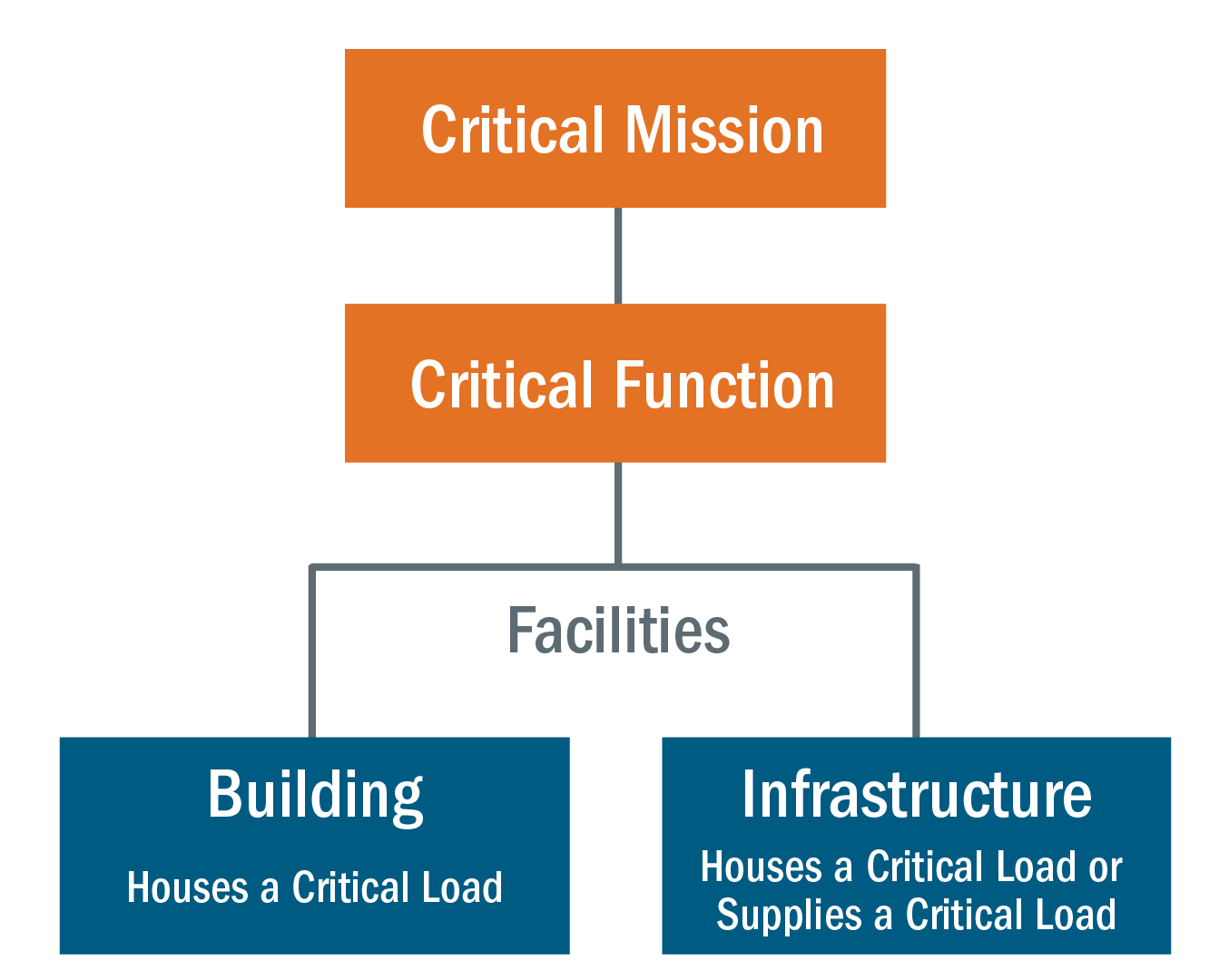 As illustrated in Figure 1, a critical mission is an organizational goal or set of requirements of such high importance that it must be fulfilled. Critical functions are the specific procedures, tasks and decisions that ensure the critical mission will be sustained under all potential operating scenarios (i.e., normal operations, emergency operations, peak or high-tempo operations). Critical functions can include direct mission-support functions (e.g., analyze and provide intelligence, provide prison security, preserve genetic material), as well as operational support functions (e.g., provide emergency response).

Organizations may have established procedures for defining critical missions and their supporting critical functions. The resilience planning team should work with the organizational and site-level mission continuity or risk management programs to identify those critical missions as a starting point for this action. The Site-Level Planning Action 4 worksheet can be used to document the site’s critical missions and functions. The resilience planning team should also seek guidance from information security personnel when compiling and documenting this information to ensure that potentially sensitive information is handled appropriately.

Critical functions should be mapped to the facilities that house those functions and documented in the Site-Level Planning Action 4 worksheet. This mapping involves looking systematically at each critical function and, referencing real property lists, identifying buildings or pieces of infrastructure that support those functions as illustrated in the figure. Any onsite energy and water supply infrastructure should also be included on this worksheet; if the infrastructure is later determined in the Baseline Development module to not support a critical function, it can be removed. The full list of facilities supporting critical functions will be used in the Baseline Development module to establish critical energy or water loads that, ultimately, the site will want to sustain. At this point, however, only the facilities must be identified. The facilities list is used to identify associated mission owners and operators who are familiar with the activities carried out in those buildings and their operations.

Tiers and weighting factors are documented in the Site-Level Planning Action 4 worksheet. If the organization or site has an existing categorization of critical functions, then that structure may be used or adapted as a basis for the tiers used in the TRN. Note that existing categorization of critical functions should only be used if they are based on the function’s importance to the organization or site’s critical missions. Categorizations based on severity of impact or time-to-mission impact if compromised are already accounted for in the Risk Assessment module. The final criticality weightings and lists of facilities supporting critical functions list should be reviewed and approved by site leadership before advancing to the Baseline Development module.

Need additional guidance? Experts at the TRN Help Desk are available to answer your questions.

Send us a message to get in touch with an expert, get technical support for IT troubleshooting, or to let us know how we're doing.